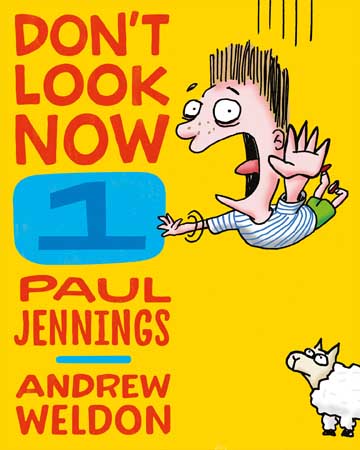 Don't Look Now 1: Falling For It and The Kangapoo Key Ring

The other kids don't see things the same way as me. I spend a lot of time imagining things. I just don't get it. Inside my head I am not the same as other kids.

Ricky is an ordinary boy, who dreams of being famous. And he has a secret that might just help him realise his dream. Because Ricky can fly. Truly. He can really fly. But there's a hitch. He can only fly when absolutely no one is looking. If a person, an animal or a bird sees him while he's flying, he will fall out of the sky and almost certainly die. But Ricky is desperate. Will he risk flying in public, just for a shot at fame?

Falling For It and The Kangapoo Key Ring are the first two stories in a brilliant series presented in words and pictures by master story tellers Paul Jennings and Andrew Weldon. Don't Look Now will have readers laughing out loud at Ricky and his hilarious adventures - on and off the ground.