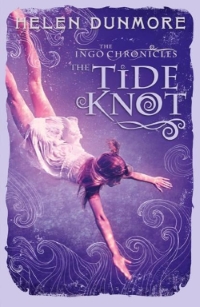 In a seaside town of sandy beaches and ocean breezes, Sapphy has never felt so far from the sea. The crowded shore at St. Pirans is nothing like the cove at Sapphy's old home, where she first found her way into the underwater world of Ingo.

But Ingo's pull is strong, and it always finds a way. Soon Sapphy and her brother, Conor, are swimming beneath the waves again, riding the currents and teasing their Mer friend Faro. As Sapphy goes deeper into Ingo, she learns to feel more at home in the sea—even as she begins to be aware of its dangers.

There's the danger of going in too deep, and breaking the delicate balance between Sapphy's life on land and her life in Ingo. There's the mysterious disappearance of Sapphy's father, an experienced sailor who should never have drowned. And then there's Ingo itself—a restless power as old as the world, as strong as the tides, and more dangerous than anything Sapphy has ever known.