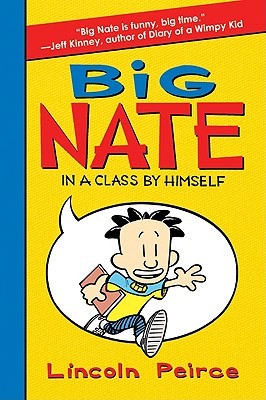 Big Nate in a Class by Himself

Big Nate Wright truly believes he is destined for greatness! He's a table tennis champ, a genius comic book artist and the self-proclaimed king of his class.

One school morning, Nate barely survives his Dad's toxic porridge before rushing off to school, forgetting his lunch. He thinks he has a test and he hasn't studied for it! Nate's class notes are full of doodles but sadly lacking any useful information! On the way to school he accidentally body slams his head teacher, then, during his first lesson of the day, he manages to insult his least favourite teacher, Mrs. Godfrey (aka Godzilla). But a little thing like having-the-worst-day-ever won't hold back Big Nate!

Please Note: This book has also been published under the title Big Nate: the Boy with the Biggest Head in the World.