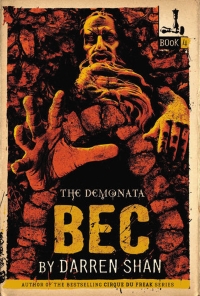 Bec is a young orphan living in a small ring fort in Celtic Ireland. She is studying to be a priestess. She's not especially powerful, but she has an extraordinary memory and her teacher, Banba, believes she can one day prove herself useful to the clan they live with. It is a time of great change – Christians have come to the country and many clans have already converted to the new religion. Bec's clan still cling to the old ways, but they know they cannot stand against the tide of Christianity for much longer. Bec is worried—where will a priestess of ancient magic like her fit into the new world? But then her people are faced with a far greater threat: demons invade and take over much of the country. Night becomes a time of fighting and bloodshed. The world seems poised to fall to the demon invaders.

In the middle of the nightmarish war, a strange boy comes to Bec's village. He's a simple-minded youth who can run very fast but can't even tell them his name. As addled in the head as he is, he carries a message – his kinsmen are in trouble and need help. The warriors of Bec's village are suspicious of the boy, but, for reasons she doesn't fully understand, she persuades them to help him. A small band of warriors are sent with the boy, to brave the demon-ravaged lands beyond the village. It will be a journey of great danger, savage fighting, stunning revelations and lots of bloodshed.