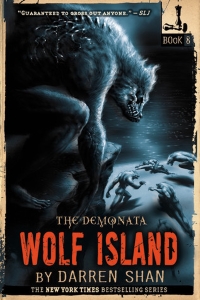 Having accepted his role as Beranabus's assistant, Grubbs has been getting on with the job of trying to find out more about the mysterious Shadow by tracking down demons and making them talk. But he hasn't learnt very much. When he hears that Dervish has been attacked, Grubbs and his companions (Beranabus and Kernel) return to Earth.

To try and find out the truth about who was behind the attack on Dervish and Bec, Grubbs heads off in pursuit of Prae Athim, the sinister leader of the Lambs. Meera Flame and Shark lend him their expertise, and Shark puts together a team of bad-ass soldiers, in case the hunt gets nasty!! But when they set down on the rooftop of the building where Prae Athim works, they walk into the middle of mystery, one whose many questions can only be answered by a visit to the ominously named Wolf Island.

On an island overrun by werewolves, Grubbs and his team will face one of their toughest-ever challenges, and Grubbs will once again have to face the beast which lies dormant within him. Grubbs is about to mature very swiftly, but it's a coming-of-age tale like no other. In the wilderness of Wolf Island, Grubbs Grady is about to learn more about himself than he ever imagined. His life will never be the same again . . .