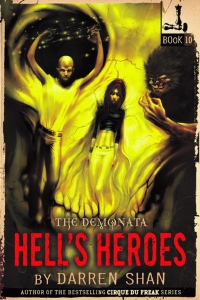 In the gripping conclusion to the Demonata series, Grubbs bids his uncle Dervish an emotional goodbye, then returns to the world beyond with a blind, captive Kernel, to take the fight to the demon armies which are crossing more and more frequently. But he knows that his true foe is waiting for him in the universe of the Demonata. And he is also fairly certain that Bec has pledged herself to Lord Loss.

When Grubbs finally decides to face Lord Loss on his home turf, it is the start of the final ever war, in which the fate of our world and universe will be decided once and for all. The stakes have never been so high. The cost of failure has never been so deadly. And the three parts of the Kah-Gash have never been so fractured.