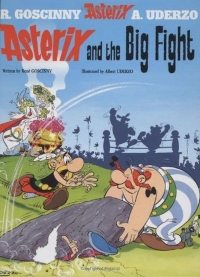 Asterix and the Big Fight

A collaborator in ancient Gaul? Chief Cassius Ceramix has gone over to the Roman enemy. There's something very fishy going on, as Legionary Infirmofpurpus discovers when he is sent to spy on the Gauls disguised as a crab apple tree. But is that just a red herring? And what about the two concussed druids brewing colourful potions? One way or another, the fight for control of the village between Vitalstatistix and his rival is bound to be a knockout.