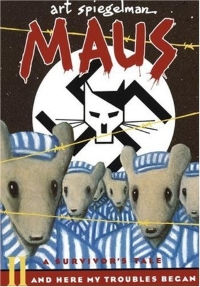 Maus - A Survivor's Tale: And Here My Troubles Began

The second volume of the Pulitzer Prize-winning comic Maus moves us from the barracks of Auschwitz to the bungalows of the Catskills. Genuinely tragic and comic by turns, it attains a complexity of theme and a precision of thought new to comics and rare in any medium. Maus ties together two powerful stories: Vladek's harrowing tale of survival against all odds, delineating the paradox of daily life in the death camps, and the author's account of his tortured relationship with his aging father. At every level this is the ultimate survivor's tale – and that too of the children who somehow survive even the survivors.