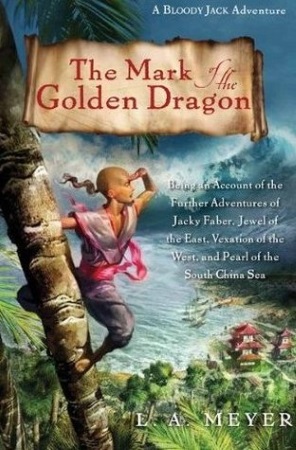 The Mark of the Golden Dragon

Being an Account of the Further Adventures of Jacky Faber, Jewel of the East, Vexation of the West, and Pearl of the South China Sea.

Jacky Faber, soldier, sailor, spy, and sometime pirate, condemned for life to the English prison colony in Australia for high crimes against the Crown, has once again wriggled out of the grasp of British authorities. Back on her flagship, the Lorelei Lee, she happily heads back to England in the company of dear friends and her beloved Jaimy Fletcher.

However, due to a typhoon, an earthquake, tidal waves, pirates, and her own impetuous nature, Jacky is cast into a world of danger that extends from the South China Sea to the equally treacherous waters of politics in London's smoky dens of intrigue, deception, and betrayal.

Can she save herself from recapture and a final trip to the gallows? Can she also save her own dear Jaimy from the madness that seems to be overtaking his tortured mind? Devious Chinese businessmen, willowy Eurasian maidens, fierce Gurkhas, loyal friends, and wildly romantic highwaymen are all involved in this tale of love, courage, and redemption.