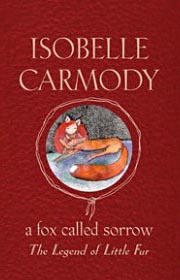 In a Fox Called Sorrow, the adventures continue for Little Fur, the half elf, half troll girl who heals animals in a magical grove in the heart of a big city. When Little Fur discovers that the Troll King is plotting against the earth spirit that binds all living things, she sets off on a new adventure with a set of unlikely companions: the faithful cat Ginger, a reluctant rat, a pair of ferrets, and a mysterious fox called Sorrow who believes their quest is doomed. Can someone as small as Little Fur prove him wrong? Absolutely!

Recognition: Shortlisted for the Aurealis Award for a Children's Novel (2007)