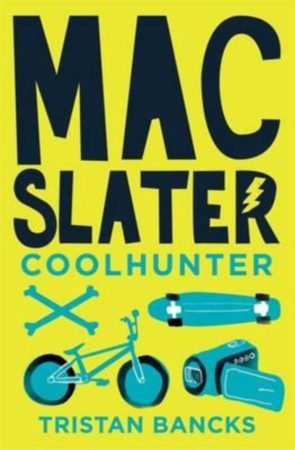 The first in a new edge-of-your-seat fiction series about the hunt for the coolest things on earth.

Mac's just crashed the latest prototype of his flying bike in front of practically the whole school. So when the creators of Coolhunters approach him and tell him he's an Innovator, Mac thinks they're crazy. I mean, Mac lives in an old bus with his hippie, fire-twirling mum. He doesn't have a TV, let alone a mobile. But Tony and Speed say he's so uncool he's, like, cool.

They offer Mac a trial. He'll vlog all the cool stuff coming out of Kings Bay for a week. If he wins he'll travel the world, uncovering stuff he loves and reporting it via Coolhunters, a massive online space dedicated to the coolest things on earth.

But hunting cool ain't easy. Mac's opponent, Cat DeVrees – angry, cold-blooded and the hottest girl he knows – wants the gig real bad and she'll do just about anything to get it. Cool or uncool? Geeks or revolutionaries? The votes are in.

Please Note: Mac Slater: Coolhunter has also been published under various other titles including Mac Slater Hunts the Cool and The Rules of Cool.