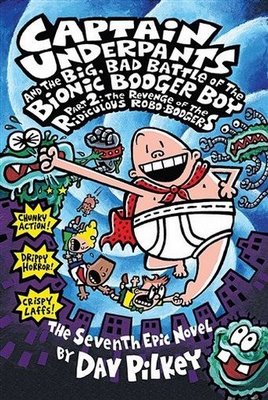 Captain Underpants and the Big Bad Battle of the Bionic Booger Boy, Part 2

Full title: Captain Underpants and the Big Bad Battle of the Bionic Booger Boy Part 2: Revenge of the Ridiculous Robo-Boogers

Strangely enough Part Two picks up right where Part One left off. Coincidence? Don't think so, after all it is the second part of the cliffhanger and that's where they usually start up again. So the second part of our story begins with robo-boogers and ends with…Ha! We're not telling you that, no spoilers here…just know that this book is a monster-mashin', robo-wranglin', time-travelin', brain-switchin', nose-pickin' good time.