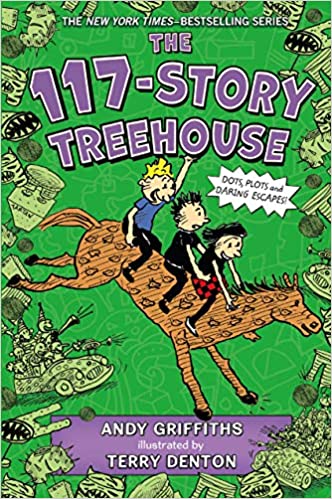 ndy and Terry live in a 117-story treehouse. (It used to be a 104-story treehouse, but it just keeps growing!) It now has a pajama-party room, a water-ski park filled with flesh-eating piranhas, an Underpants Museum, a giant-fighting-robot arena, and the Door of Doom (don’t open it or you’ll be COMPLETELY and UTTERLY DOOMED!).

For as long as Andy and Terry have been writing books together, Andy has always been the narrator and Terry has always been the illustrator. But when Terry tries to prove that he can narrate as well as draw, the story goes completely out of control and the Story Police arrive to arrest the whole treehouse team for crimes against storytelling! Andy, Terry and Jill go on the run, but how long can they evade the Story Police and stay out of Story Jail?

Recognition: Winner Abia Book of the Year for Younger Children (2019)