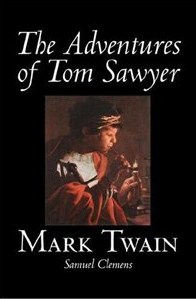 A series of irresistible tales of the adventures of two friends growing up in frontier America, the 'Tom Sawyer' books introduce two of literature's most colourful and cherished characters.

The first two books in this series have long been regarded as great American novels. The farcical, colourful, and poignant escapades of Tom and his friend Huckleberry Finn brilliantly depict the humour and pathos of growing up on the geographic and cultural rim of nineteenth-century America. Originally intended for children, these books transcend genre in their magical depictions of innocence and possibility.

Please note: The title character, Tom Sawyer, also appears in at least three unfinished Twain works, 'Huck and Tom Among the Indians,' 'Schoolhouse Hill,' and 'Tom Sawyer's Conspiracy.' While all three incomplete works were posthumously published, only 'Tom Sawyer's Conspiracy' has a decipherable plot, as Twain abandoned the other two works after finishing only a few chapters. Being regarded as incomplete, these tales are not recorded here as part of the official Tom Sawyer series.