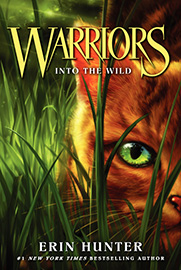 Warriors is a fast-paced and suspenseful animal fantasy series about wild cats. It follows the adventures of four Clans of wild cats in their forest homes: ThunderClan, WindClan, ShadowClan and RiverClan, and later in the series, the long-forgotten fifth Clan of the forest, SkyClan.

The cats in this fantasy series have both everyday human-quality experiences, as well as the drama and conflict associated with clan loyalties, survival, and battles over territory in the animal wilds. This first series follows a pet cat named Rusty, who has dreams about the forest that lies beyond the neighborhood he lives in.

There are currently four main sub-series, each containing six books: Warriors, Warriors: The New Prophecy, Warriors: Power of Three, and Warriors: Omen of the Stars. The start of a fifth series, Warriors: Dawn of the Clans or A New Reign, is proposed for 2013. There are also a number of manga series for readers of graphic novels, as well as field guides.