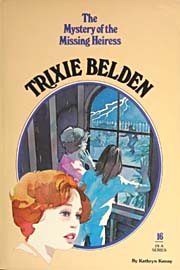 The Mystery of the Missing Heiress

When the owner of the Blue Heron Marsh land is sought, Jim finds that the land is owned by his aunt. An investigation by the Bob-Whites reveals that while his aunt is dead, Jim has a cousin, Juliana, who is still alive. The Bob-Whites find Juliana in Sleepyside, but their discovery is over-shadowed by a mysterious woman - nicknamed 'Janie' - who has been hurt in an accident and is suffering from amnesia. Trixie tries to help Janie find her family and discover who she is, but her attempts are thwarted by Juliana. When another attempt is made on Janie's life and Juliana begins acting mysteriously, it is up to Trixie and the Bob-Whites to find out the truth and uncover the true identity of both Janie and Juliana.