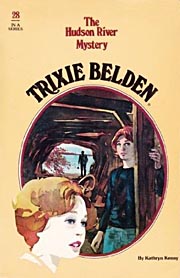 When Trixie sees a shark fin in the Hudson River, no one believes her. Brian's lab partner, Loyola Kevins, suggests Trixie talks to a friend who knows a lot about the Hudson; she tells Trixie and Honey that sharks are quite common in the Hudson. But Trixie has other mysteries to solve. When Brian becomes ill from cyanide poisoning, she makes impulsive accusations about the source of Brian's poisoning, only to find she has jumped to conclusions. Trixie is eager to solve the shark mystery and stop her friends from doubting her, but when she and Honey stumble on the truth they find themselves trapped in a car, sinking in the Hudson River...