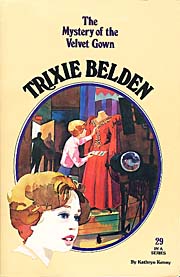 The Mystery of the Velvet Gown

The Bob-Whites are excited when Di wins the part of Juliet in the school play which is to be directed by their new drama teacher, Eileen Darcy. The cast are thrilled when she organises for some rare costumes to be loaned to them for the school play, but Trixie soon suspects that something is not quite right with the young drama teacher and her handsome fiancé. Trixie learns that Miss Darcy's father has been kidnapped and Honey has a feeling she's seen her fiancé somewhere before, while Miss Darcy becomes quite protective of the costumes and is acting very strangely. Trixie and Honey attempt to investigate the pair, while also trying to protect Di from a jealous classmate and solve the mystery of the Velvet Gown.