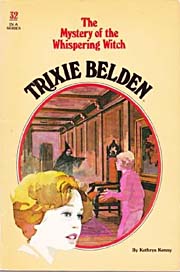 The Mystery of the Whispering Witch

Trixie, Honey and Brian go to the aid of a classmate, Fay Franklin, after her mother has an accident. Trixie and Honey reluctantly volunteer to stay with Fay in Lisgard house, knowing the house is believed to be haunted. Trixie hears a strange voice warning her to beware and the night becomes one of terror as they seem to be reliving the death of Sarah Sligo, a witch burned to death in the house over two hundred years ago. The girls flee in the middle of the night, but the Bob-Whites are sceptical about what actually happened at the house that night, and the female Bob-Whites set about to uncover the truth and help their misguided friend, Fay.