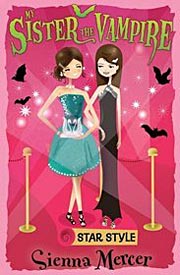 It's the premiere of "The Grove", the Hollywood film Olivia had a small part in – as a goth. Jackson, her Hollywood heartthrob boyfriend, wanted to walk down the red carpet with her, but a fashion disaster puts paid to that. And then a top Hollywood producer mistakes Ivy, in her goth gear, for Olivia...

Meanwhile, the twins' biological dad seems to be all of a flutter near Lillian, second director on the film. And Charlotte Brown is inexplicably hanging around with Jessica Phelps, vampire super-actress. Plus everyone seems to be copying Olivia's premiere fashion style.

Suddenly Olivia and Jessica are in competition for the lead in a new vampire romance movie, opposite Jackson. And Jessica plays mean...