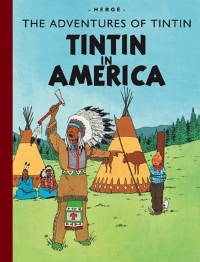 Having overcome Al Capone’s gangsters in Tintin in the Congo, Tintin is sent to Chicago, Illinois, to clean up the city. He’s captured by gangsters several times and soon meets Capone himself. Although he temporarily captures Capone and some of his henchmen, the policeman he calls to arrest the gangsters doesn’t believe his story and tries to have Tintin locked up instead!

As the adventure continues, Tintin battles crooks and skillfully escapes from traps. When the devious gangster Bobby Smiles escapes Chicago to travel deep into Indian territory, will Tintin be able to track him down or will he find himself face to face with an even more dangerous enemy?