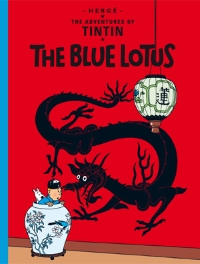 In the sequel to Cigars of the Pharaoh, Tintin is in India taking a well-earned rest when he is drawn into a dangerous mystery revolving around a madness-inducing poison known as opium. Our tenacious young reporter travels to Shanghai—the source of the international opium trade—where it begins to look as though Tintin has bitten off more than he can chew.

With the assistance of the secret society Sons of the Dragon, and his new friend Chang, Tintin succeeds in overcoming myriad obstacles to finally triumph over his adversaries and disband their network of corruption. Set within the real historical context of the tensions between China and Japan during the 1930s, The Blue Lotus marked the first time the Chinese culture was represented in cartoon art in what could be considered a realistic way. Hergé relied on the assistance and insight of Chinese artist Chang Chong-chen, who was immortalised by a character of the same name in the story and who became Hergé's lifelong friend.