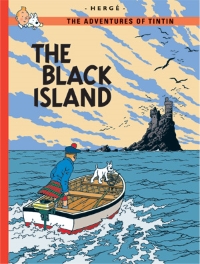 Tintin hopes for a brief rest following his escapades in Latin America (The Broken Ear), but his hopes are quickly dashed. As he comes to the aid of an aircraft that has made a forced landing, one of the pilots shoots at him. This is the beginning of an adventure that takes Tintin to Great Britain, where certain people are determined to make him disappear once and for all. Framed for theft, Tintin is arrested by Thomson & Thompson, who are on the trail of a gang of counterfeiters.

Tintin discovers that the head of the organisation is the sinister Doctor J.W. Müller, and that the printing press used to create the false money is hidden on the terrifying Black Island, off the coast of Scotland. According to local folklore, the island is haunted by a wild beast. Will Tintin discover the truth behind these stories?