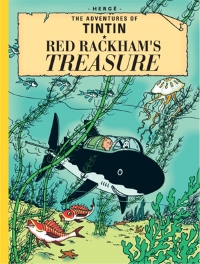 In the sequel to The Secret of the Unicorn, Tintin is convinced that Captain Haddock’s ancestor, Sir Francis Haddock, used a series of clever clues to describe the precise location of a priceless treasure. Tintin, Snowy and Captain Haddock rent a boat called the Sirius and set sail on a treasure hunt. Without knowing it at first, the team is accompanied by an eccentric scientist called Professor Calculus. Although it is difficult to hold a meaningful conversation with the professor due to his hearing problems, Calculus more than proves his worth as an extra passenger. His ingenious mini-submarine certainly comes in very handy when searching for shipwrecks!

While the intrepid explorers search for the treasure, Tintin can’t help wondering if there’s an important clue they might have overlooked. But in the end, the big question concerns Marlinspike Hall and its place within the saga of Sir Francis Haddock . . .