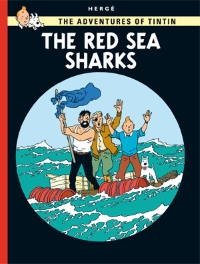 Through a chance meeting with General Alcazar, Tintin finds himself on the trail of international arms dealers. He tracks down a man smuggling military aircraft; the crook turns out to be Dawson, the corrupt ex-police chief formerly responsible for the International Concession in Shanghai (The Blue Lotus). However, another old foe shows up in this adventure – Doctor Müller, who first appears in The Black Island and Land of Black Gold, is now working under the name Mull Pacha.

The trail eventually leads to the Arab state of Khemed. The King of Khemed, Emir Ben Kalish Ezab, has been dethroned by his old enemy, Sheik Bab El Ehr. The coup has been supported by another old enemy: Rastapopoulos. This evil mastermind is now working as an arms dealer and is also implicated in Red Sea slave trade. Will Tintin succeed in dismantling the odious clandestine commerce handled by the sinister Rastapopoulos?